ME/CFS - What helped my fatigue 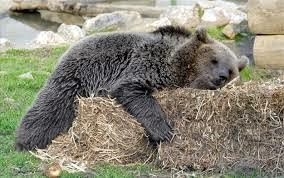 For the latest RESOURCES on ME/CFS please look here

An article published in October 2014 in Stanford Medicine News Center talks about the research which claims that the brains of patients with chronic fatigue syndrome have white matter abnormalities in the right hemisphere of their brain, comparing to healthy people or people without CFS.

“CFS is one of the greatest scientific and medical challenges of our time,” said the study’s senior author, Jose Montoya, MD, professor of infectious diseases and geographic medicine.


“Its symptoms often include not only overwhelming fatigue but also joint and muscle pain, incapacitating headaches, food intolerance, sore throat, enlargement of the lymph nodes, gastrointestinal problems, abnormal blood-pressure and heart-rate events, and hypersensitivity to light, noise or other sensations.”

The combination of symptoms can devastate a patient’s life for 10, 20 or even 30 years, said Montoya, who has been following 200 CFS patients for several years in an effort to identify the syndrome’s underlying mechanisms. He hopes to accelerate the development of more-effective treatments than exist now.

Read the full article here and please come back to this blog to learn about the other interesting, newly found specific biomarker for CFS ↓ ↓ ↓

There is another new, well referenced article on Medscape (free registration needed to view) called ‘Chronic Fatigue Syndrome: Wrong Name, Real Illness’. In the article, the author Miriam E. Tucker briefly mentions details about CFS/ME definition, problematic process of the diagnoses and the still poor acceptance of CFS as a real illness, meaning with no underlying psychological or psychosomatic problem as primary reason for CFS development.


"In medicine, we tend to like the one-answer solutions.


We're great at diagnosing things that have one problem, like a clogged artery.


What we're really bad at are complex diseases that have a systemic issue going wrong.


With ME/CFS it's the whole system that's broken down, so there may not be one pill to cure everybody.


It's more a matter of figuring out the imbalance in the system. We're not good at thinking that way in medicine. I think that's something that we need to change, particularly around this disease."


"People do think it's a spectrum of disease. We've settled on that it's an immune-related disorder, and there is potentially a subset that's autoimmune, a subset that's viraly triggered, a chronic viral infection, and perhaps other triggers or stressors... People are still kicking around whether it's autoimmune or chronic low-grade infection."


I was diagnosed in 2009 and offered next to no help from the medical profession. I had no other choice than to embrace what was happening to me and face it with tools I had. Not to fight it, as many like to call the process of healing. There was NO energy to fight anything. There was only stillness, peace and falling to the bottom in order to rebound up again. This has repeated several times but with less and less intensity until I was finally able to leave my bedroom...

I wish there was at least the knowledge available, we have today - please refer to my latest resources (in case you read this in far future :) or directly to the article based on  Dr. Robert Naviaux research and elegantly written by Veronique Mead, MD.


Early on in my journey during the "dark ages" I was, however,  intrigued to read a study comparing biological markers of CFS and non-CFS groups after exercise.

This is a very objective marker and may be the only marker easily measured or observed, especially in those patients, who’re already managing other symptoms of CFS - often "the part under initials ME",  mainly involving muscle pain.

The common picture of CFS person is healthy on the outside and according to commonly provided blood tests. There is no visible disability, while the truth is, unfortunately, very different on the inside.

Here is a list of markers tested positive in high number of CSF patients, not found to be common in non-CFS people (references included in the original article) :

a) Significantly reduced oxygen consumption in CFS after a treadmill test

I AM GOING TO SHARE WHAT HELPED IN MY CASE BUT REMEMBER WE ARE ALL SLIGHTLY DIFFERENT AND THERE IS NO SAME PROTOCOL FOR TWO DIFFERENT PEOPLE.
I WILL BE HAPPY TO MAKE YOUR INDIVIDUAL PLAN DURING THE COACHING AND THIS CAN BE COMPLETELY DIFFERENT TO WHAT IS WRITTEN NEXT!!

After researching the subject of EMF sensitivity and HSP (hyper-sensitive person syndrome), this could be caused by:


4) environmental burden on detoxification pathways (fume exhausts, mycotoxins and GMO as the most likely causes) increasing demand on immune system

Obviously, trying to sort out my problem, I’ve done some interesting reading over the past years in the field of nutrition, functional medicine, quantum medicine and traditional medicine such as Chinese. This became the primary focus of my life, my adventure, hobby and my profession. I always knew there was something else going on. Some specialists suspected a virus or bacteria hidden in the deep tissues, some blamed heavy metal burden from the industry or dental work, autoimmune condition destroying our mitochondria or adrenals, causing inflammation in the brain. Many blamed adrenal exhaustion (correctly HPA dysfunction) as a cause of CFS but why this happened in the first place was always a bit of mystery.

On my journey I’ve done numerous experiments with foods, supplements, balneotherapy, altitude therapy and other treatments. Here is the list of things which worked for me and made a VISIBLE STEPS FORWARD in overcoming fatigue and "giving" more energy:

Fresh royal jelly from my home country and clean sea vegetables from UK company Seagreens were first ‘remedies’ to give me a visible long lasting ‘energy kick’.

After many years of being nearly vegetarian and vegan (wrong!?), I introduced dairy foods, trying to find as clean and organic sources as possible. These helped to raise my hormones and feel much more energetic and alive!  I had to watch the amount first, as it happens after a period of eating dairy & meat, there may be increase in symptoms of oestrogen dominance, inflammation, sinus congestion and histamine intolerance (cheese!). Some pains can creep slowly back, with more animal or allergenic foods introduced, so the BALANCE is the answer.

Savoury whey soup (unfortunately only available to make from the fresh, raw milk), brings up feelings of calm even during extremely stressful occasions (such as travel) and also helps, not surprisingly, with digestive issues.  This can be literally instant! I have not found any replacement so far, in form of any supplement for this "fresh savoury" whey liquid, we get in large amounts as a by-product when making  traditional quark in Slovak households. Most of it goes to animals, cats, pigs or even down the drain...!

Bone broth  - the more often I have it, the better I feel, it is also our traditional soup.  Surprise surprise. It was amazing to watch how, during the last decade, this food was "discovered" by health community here in western countries.

This is a supplement from hair mineral analysis testing company ARL. It has a very specific combination of chelated minerals and vitamins. In my experience it helps to calm down over-stressed body and therefore give it a much-needed space to recover. My sleep is more peaceful using this supplement and it also seem to keep my immunity in better condition if I take it regularly.  High manganese level in this supplements helps not only with joint pain but also supports the heath of hypothalamus and pituitary glands and the whole HPA axis.

The effect of true ADAPTOGENS is mild and increases with their time of use. Unlike herbal stimulants such as various ginsengs, maca, tribulus, chocolate, coffee, guarana, cola, royal jelly etc. it is safe to take adaptogenic herbs long term without side effects.  Be aware of their diuretic action and only take as part of wider plan including correcting electrolytes and mineral deficiencies.

I created Nutriwellness Magic Mix drink, consisting of herbs such as turmeric, reishi, coriander, cinnamon, pepper, chicory, cordyceps or schizandra, taken with a spoon of ghee or butter, which can be adjusted to individual needs and tastes. 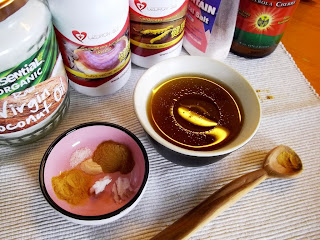 
6) Avoiding all forms of stimulants

In the worst stages of HPA dysfunction or "adrenal exhaustion", any small amount of dark chocolate, coffee, tea, alcohol or even ginseng, rhodiola and B-vitamins, would cause me a big set back. The following day after ingestion I would crash to the depths of exhaustion nightmare. I became so exhausted I had to make myself to breathe consciously. I am not kidding. My body was not able to breathe without me concentrating on it. My breath would be very shallow and even stopped for 10-15 seconds at times.

This was one of my promising experiments in the never-ending search for normal life and daily energy.  I made mistake to use dosage written on the box by manufacturer. It took me one year to realise MY PERSONAL DOSAGE was only 1/12 of the recommended amount. If you have CFS or "adrenal exhaustion", watch the dosage on all supplements, especially stimulating ones, never use dosages recommended for otherwise healthy people.

After learning about chronic mold exposure (also called CIRS) and its ability to switch on CDR response in 2017, I decided to invest in various dehumidifiers/purifiers. I realised that all the houses and flats I have ever lived since 1998, were seriously water damaged, with remaining sources of black mold. The air purification would not directly made too much difference in my energy levels, but helped to solve returning sinus problems. It helps me to breathe better and have better sleep, shortening the needed average sleep time from 11 hours to 10.


I will finish this blog with the words of Dr. Komaroff, professor of medicine at Harvard Medical School and senior physician at Brigham and Women's Hospital, Boston, who has been studying the condition since the 1980s.


"I think the most important thing for physicians to know is that while we don't have a diagnostic test or a proven treatment, there is now abundant evidence that in these patients there is an underlying biological process. Their symptoms are linked to problems of their biology and not imagined."


Posted by nutriwellness at 5:42 PM 2 comments: